Person Has 2 Tickets, 1 Speeding, 1 Not Stopping At A Stop Sign

Person Has 2 Tickets, 1 Speeding, 1 Not Stopping At A Stop Sign


A long story, but basically, (not for me). back ground


Person has 2 tickets, 1 speeding, 1 not stopping at a stop sign (no points)

speeding comes off next year 202 April'ish I think


SO I need the name of a good traffic ticket lawyer, to fight the 3rd speeding ticket


I need someone who can fight the ticket, get it dropped or at least delay it.

So that insurance will only see 2 tickets, "IF" they do an abstract.


So, to re-iterate, I don't want someone who will just go an plea bargain with the prosecutor,

I could do that. The person needs it dropped, thrown out, or delayed.


I will check the ticket for obvious failures, and report back


And any further advice always appreciated

You're likely not going to find anyone easily who will prepare for a full blown trial on a minor speeding ticket.


If you're trying to get some more months out of this, just book a trial. You're likely not going to get a date within the next 6 months at the very least depending where the courthouse is.

but I check for flaws.

the way the conversation went was something like she was sorry about giving the ticket etc.

Driver seems to think the cop will be a no-show.


Again seen a lot of stories on here, and this doesnt really sound right.


pls confirm, I thought even if the cop was a no-show, then the judge can re-chedule and not throw it out

Could someone please check this for fatal flaws, 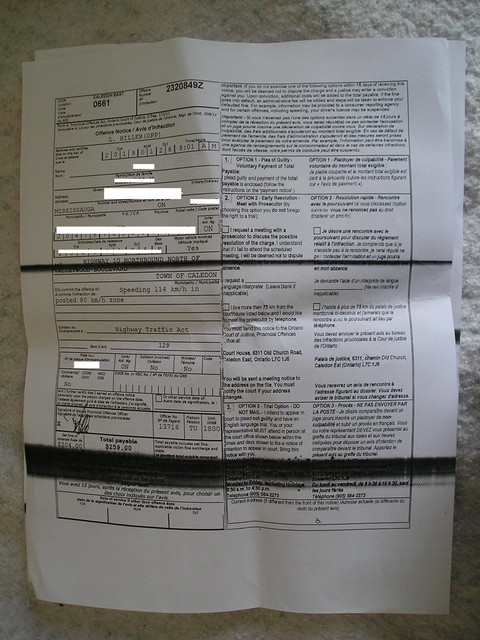 
Sorry for the long delay, I looked up a company who had some good recommendations,

"Street Legal", had my friend contact them, I think she paid about $300 or so, I was helping with questions and liaising with them as well, there was a couple of glitches, but the best they were trying to get to was get the speeding ticket delayed as mentioned above, the person was speeding, and didn't want 3 tickets at renewal.


Got delayed, got new trial dates, basically, my friend did not need to go to court at any point, the ticket was thrown out, something like insufficient evidence, so that was a result !


I doubt I could have got the same result for her, no fatal flaws and she was speeding, plus I didn't have the time, as I said there was some glitches, but good result, I guess, because I knew some thing from this site and was pushing for things we could not easily do and certainly not just settle.


On the other hand another friend (workplace) she got 3 tickets in one hit, I passed her to them, paid $300 upfront, there result, in my eyes was not good and something she could have plea bargaind and saved herself $300 bucks


Basically, they dropped 2 of the tickets, and reduced the main one and dropped the point's , she still has one ticket and fine... this is something that she could have just done at ER

but "SHE" was happy, I tried to explain several times, this was not a good result, as dropping points means nothing really.


Difference is, she was dealing with them as a total noob, I think it's important to deal with any company/lawyer with a modicum of information, otherwise, you may as well do it yourself.

Not reporting incidents such as tickets to your insurance company is one of the most idiotic things a person can do. The moment you have any insurance claim, they will deny you coverage for failing to abide by your contractual obligations. It happens quite frequently. You might get lucky where the insurer will at least refund you your premiums already paid, but in many cases they won't even do that; instead challenging you to sue them so they can then have a field day with you. Any insurance litigator knows this happens VERY often---insurance companies are ALWAYS looking for an excuse to deny you coverage and pay out---so, why on earth would you make it so flagrantly easy for them to do that! You're only giving yourself the illusion that you have insurance coverage.

Hey man, of course you are right.


This happens here and even around the world. Yes you are supposed to tell the insurance company about things, I infact reported a ticket to them, and when I was on the phone to them they where kinda incredulous that I was reporting something ,I got an "so your ringing to tell us you have a ticket?" kinda tone...


I had (without going into full details) an omission which slipt my wife's mind, then I was actually driving wife's car, car was totaled and I also sued for over 10k in damages, insurance company never checked one single thing on her policy. Nothing.


I also know of several people who have purposely not declared tickets and had write off's and the company has never once refused a claim.


I did a lot of research years ago and a few sources said insurance generally don't or can't refuse a claim, as it's all at fault, and there's no imperical evidence on many of the forums of people saying there insurance co. walked away.


I also think there is a big difference between, ringing your company and telling them, as opposed to being asked say at renewal and blatantly lying.


I've had people in insurance tell me, depending on a lot of factors, ins. co.s may or may not pull an abstract and consensus is, "it's too bad if they miss it" there where a lot of threads on people doing this.


I never lie to the police or insurance, that's a no-no, but I won't necessarily give information not asked for.


I don't wanna come across as being irresponsible or a douche, you are TOTALLY correct in some respects, but my experience here in Canada says differently, the amount of people driving uninsured, and nothing happens, drunk drivers the full 9,


Point in case, I've often see people trying to beat cases when they are clearly guilty, when asking for advise here, so how is that different to not telling an insurance company about a ticket ? LOL


It is what it is, but, the thread was resolved, I do read all advises and don't advise people to do wrong thing,

Its the insurance litigators that you have to worry about! A lot of the insurance company employees play nonchalant about a lot of things until the lawsuits start---then their positions seriously change. That's why its always important to deal with them in writing. Numerous cases have gone to the Court of Appeal and even to the SCC dealing with insurers obligation to pay, obligation to defend, bad faith, and exclusionary clauses.


You just have to read section 1.4 of the Ontario Auto Insurance Policy to see the driver's obligation to report---they even warn about cancelling in BOLD letters. Its on page 3. Anyone interested can read the OAP here.

Users browsing this forum: No registered users and 5 guests